After we studied about Oceans, we launched a new Topic Unit on Ancient Mesopotamia. We have focused on these four sub-topics:

The kids learned that cuneiform is a series of symbols that represent syllables. It was the first written language. Scribes used reeds from the marshes of the Tigris and Euphrates Rivers as their stylus or pen. Scribes pressed their stylus into damp clay to form their letters. They let the clay dry in the sun if they wanted to keep it and washed it clean to erase. Mesopotamian scribes studied for 12 years to master the art of writing in Cuneiform. Middle Kids, however, had about 45 minutes to scribe their name into a small piece of clay! They learned through this process that lots of mistakes are made when trying new things and it’s important to be flexible, have a good attitude and keep trying! With Bryce and I’s assistance, they were able to create some pretty cool Cuneiform tablets… 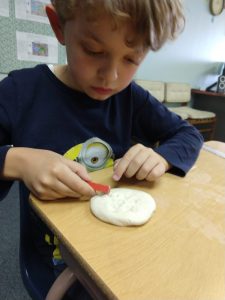 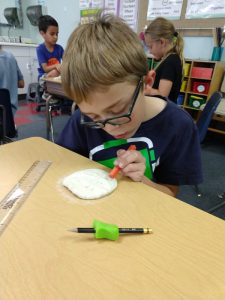