We were able to take advantage of some of the nice fall weather to play basketball. All age levels worked on fundamental skills of dribbling and shooting. Middle and Older kids also developed teamwork with passing skills, and learned the basic rules. We finished with a mini tournament, with 3 teams in each class playing each other round-robin. 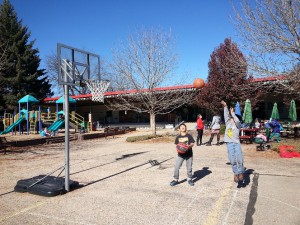 When the weather didn’t cooperate, we played netball inside. Netball is a sport that isn’t very popular in the United States, but is played more in Europe and Asia. It involves passing and shooting, but no moving with the ball or dribbling (similar to Ultimate). That made it a great fit for the small space in our indoor gym. Believe it or not, netball has been around almost as long as basketball itself!