We do a lot in PE that meshes with our school-wide “Systems of the Body” topic unit. Anatomy involves a lot of rote memorization, so we try to make it more fun by making it into games.

We used our new scooters to play anatomy tag–you must tag your classmates in the appropriate bone or muscle. Tag the tibia! The tricep! The humerus!

We used foam bricks to build skeletons. The kids had to do exercises that help them build their own skeletons to earn the bricks. When the skeleton (and the exercises) were completed, they had to identify all the bones they had placed. We didn’t have enough white bricks for everyone, so we had to use black ones. What animal has black bones…? Trick question! None. Well, except for this one weird mutant Asian chicken variety, but I’m not sure that counts.

Next up: circulatory/respiratory system simulation, with the kids assuming the roles of heart, lungs, muscles and blood cells. We’re currently playing the sport the rest of the world calls “football”, but we Americans call “soccer” (well, except the Italians who call it “calcio”, but that’s another story). It’s not just about kicking the ball… we played kickball a few weeks ago! It’s about having control of the ball, whether it is dribbling, passing or shooting.

We did lots of games where kids had to keep close control of their ball before using those skills in small games (without goalkeepers). Preschoolers did things indoors with small foam balls. 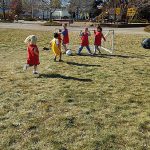 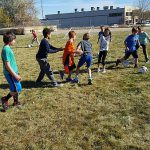 Since we are studying ancient Greece, and the summer Olympics was recently in Rio, we had our own Greek Olympics here at Rivendell.

The Middle and Younger Kids were divided up into  city-states, and each athlete competed in several events. Younger Kids got to try the events individually. Some scholars think the original Olympics may have had only one event: the Stadion race, which was about a 200m sprint. To that, we added “archery” (throwing a ball at a target with a scoop, below), “javelin” (a foam football), “discus” (flying discs, below), “wrestling” (a sumo-style competition where competitors only touch hands and have to push the other out of the ring, below), and the culminating event, the “chariot” races (pulling each other on sleds across the grass).

The competitors from Athens, Troy, Sparta and Argos all gave it their best efforts, and the victors gained fame far across “ancient Greece”. After movement and locomotor skills, one of the fundamental skills we practice in PE is throwing.  Correct form is important for accuracy and distance… and if you’re more accurate and can throw farther, it’s more fun, too!

We work on throwing technique for all age levels, starting with the preschoolers. They learn to keep their arm up behind them, elbow in an “L” shape, look at the target, step forward, and follow through towards the target.

We used hoops as targets, and they were pretty excited when they could toss their bean bags into the hoops, especially from way back! 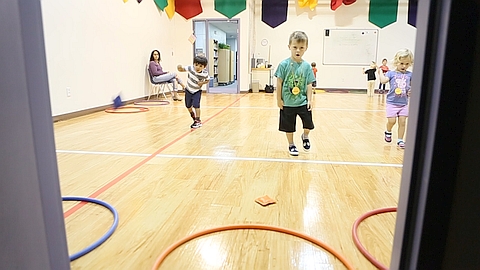 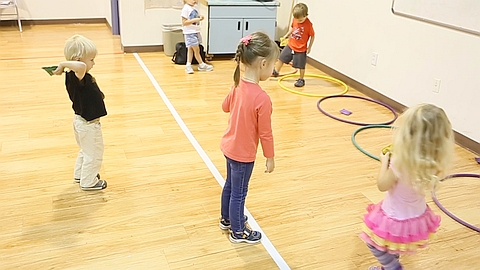 We don't overlook those classic PE activities we all remember from our own childhood. Kickball, tag, the giant parachute... and how about a vigorous round of Scooter Soccer? While the Golden State Warriors set the all-time record for wins in the NBA regular season, we learned basic basketball techniques: dribbling, passing and shooting. Basketball is a fantastic sport that incorporates footwork skills, eye-hand coordination, agility and coordination, and teamwork.

You can play a game of HORSE, one-on-one, or a game with full teams. Preschool and Younger Kids practiced their skills without opposition, and Middle and Older Kids progressed to full games. 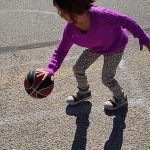 We also did a cooperative relay I call “Hungry Snakes”. 3-4 kids form a “snake”, and have to travel around the room together to “eat” the balls. After the head of the snake picks up a ball, the ball has to pass from one person to the next all the way down to the end.

Teamwork and cooperation is the name of the game!

We’ve been studying nutrition in PE. A good diet is an important part of keeping your body (and brain) healthy. So far we’ve learned a few basic facts:

We illustrate these with relay games, tag and even a game show! There is a lot to learn about healthy eating (even the experts sometimes don’t agree) but it’s a start.

We are taking advantage of the continued nice weather to play volleyball outdoors with Middle and Older Kids. We’ve practiced our serve, pass, set and spike. The Fun Run was a big success! The kids did a great job, everyone cheered, and the weather was nice and cool. Please remember to turn in your pledge money.

Preschoolers and younger kids have been working on all sorts of locomotor skills and movement: walking, shuffling, skipping, hopping, movements using the hands like a bear or crab. They get to use their imaginations acting like different animals and objects. How do you move like a cloud or a tumbleweed? We also include basic eye-hand coordination with throwing (both overhand and underhand) and catching objects. And we include the popular “Monster’s Closet” game where we learn about personal space. It can be tough to try and fit 18 monsters in a single tiny “closet” (hula hoop) a few feet across, but they sure did try!

Older and Middle Kids are working on eye-hand coordination by playing volleyball. We’ve introduced the pass (bump), set, and serve (again overhand and underhand). Next week we will get to the spike (or kill) and get to the rules of game play.