We’ve started our spring unit on Track and Field.  Running, sprinting, jumping and throwing are all on the menu—weather permitting, of course. So far all ages have enjoyed sprints (up to 100m) and the long jump.  Middle and Older Kids get introduced to the mysterious triple jump (not just a jump, but a hop, a step and a jump!).

Older Kids not only get to try the shot put with a 6-pound shot, but have the opportunity to compete in the shot put and many other events against kids from all over the area at the PSD Track Meet. The meet is held every spring at French Field at Rocky Mountain High School, and PSD graciously allows Rivendell to participate.  We’ve had lots of competitors over the years and some fantastic finishes… I hope we have more this year.

For more info on the PSD Track Meet, see the information page. Fee; free to contact me if you have questions about it.

We are wrapping up our unit on nutrition in PE.  We’ve talked about the kinds of foods we eat and how they make up a healthy (or not so healthy!) diet.  Some of the topics we covered:

We teach all of this actively, with kids choosing their foods and collecting bean bags to represent the nutrition in each. Watch out for those French fries! Preschool and Younger Kids have gotten to play some fun and vigorous games with our parachute this week.  They illustrate stories about the waves and the wind at the beach, make giant domes and mushrooms, and make “popcorn” by waving the parachute and popping the balls right out. 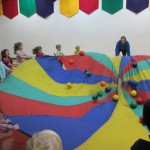 As you can see, everyone (including me) had a great time, and it’s more of a workout than you might expect.  And of course, everybody likes popcorn!

Middle and Older Kids are starting one of our favorite units: Invent A Game. Students have the task of creating a game and presenting it to the class.  Then we’ll give it a try!  It’s amazing to see some of the creative ideas the kids come up with.  We still use some games that previous Rivendell students have invented.

We look at all the aspects that go into a game:

Preschool and Younger Kids will continue to work on fundamental athletic skills like running, throwing, catching, kicking, balance and agility.

We’re currently on a school-wide unit on systems of the body—a perfect topic for PE class! As the kids learn about the body in class, we reinforce the concepts and learn more with fun, active games: anatomy freeze tag for names of bones and muscles, skeleton building with exercises and foam bricks, circulatory system simulations where the kids get to be blood cells, heart, lungs or muscles, finding our heart rates, and learning about health risk factors in Heart Attack City.  All these activities are an exciting, kinesthetic and dynamic way to learn about the incredible human body.

In Early Childhood and Younger Kids, we learn names for various parts of the body and exercises that help our bones, muscles, heart and lungs get stronger. Middle and Older kids learn more technical names for major bones and muscles, lots of no-equipment-needed exercises, learn how the systems work together (and how they can break down), and about health risks like heart attacks and strokes and how to help prevent them.

Having students understand healthy lifestyles in one of our goals in Rivendell PE. Understanding the systems of the body is important so the kids know how it all fits together to keep everyone healthy and happy!

To simplify the weekly PE schedule, we’ve moved one of Bryce’s classes PE times to a new day.  The previous Tuesday PE class has been moved to Thursday at 10:30am, so Bryce’s class now has PE on Wednesdays and Thursdays.  If your child is in Bryce’s class, please make a note of it so they can be properly attired to run, jump and throw. This fall, we are set to explore the sport of rugby.  It’s a game that is not as popular as other sports in the US, but has a growing following.  Interestingly, it arose from the same ancestral game as soccer and American football, but the three diverged roughly 150 years ago when some players wanted to keep the “kicking game” (soccer), and others wanted to be able to pick up the ball and run with it.

Of course, we won’t be tackling, or having rucks or mauls. We will use a variation called American flag rugby, which is much like flag football—only it’s rugby!

For Younger Kids, we will focus on the mechanics of running and passing, as well as the joys of flag pulling. We’ve already introduced the concept of flag belts with a rousing game of Sharks and Minnows.

Middle and Older Kids will progress to game play, with boundaries, scoring, and penalties. The mysteries of scrums, lineouts, and knock-ons will be revealed.

We’ve learned all about volleyball: serve, bump, set, spike, rotating, keeping score.  There’s even math involved!  (When playing outdoors, etiquette is to switch sides of the net whenever the teams’ combined scores add up to a multiple of 5.)  The kids did a great job, as you can see in these pictures from our first “official” volleyball game. We’ve started a new unit this week on volleyball.  To volley is to strike an object out of the air before it hits the ground.  A ball is, well… the kids know what a ball is!  Put the two together (and throw in a net) and you have the sport of volleyball.

Preschoolers and younger kids start off with a beach ball.  Middle and older kids use “Volley Lite” balls, designed with softer covers and lighter weight to take the sting and fear out of hitting the ball.  Now we just have to wait for less rainy weather so we can get outside, and stop worrying about the balls hitting the ceiling!

More pictures from our second day of Rivendell Olympic competition.