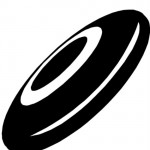 With the beautiful fall weather, we are outside starting a unit on flying discs. Did you know that Frisbee® is a trademark of Mattel Inc.? There’s a story behind the name, too.

We learned the word “apocryphal”, which means a story that may or may not be true and nobody knows for sure. But it’s said that in the early 20th century, college students on a picnic bought pies from the Frisbie Bakery in Bridgeport, Connecticut. After the pies had been eaten, students turned the empty pie tins upside down and threw them through the air, crying “Frisbie!” (which was printed on the bakery’s pie tins). Thus, supposedly, the flying disc came to be named.

We’ll be learning how to throw and catch the discs in different ways, and playing games like Ultimate, Double Disc Court, Schtick, and disc golf.