We had a great end to the year with our Dinosaurs and Birds Unit. We began the unit by learning about the geologic time scale and all that came before dinosaurs. Students learned that so much had to happen to our earth in order to support the life of creatures like dinosaurs. We then put on our paleontologist’s hats and explored and learned about the difference between body and trace fossils. Finally, the last couple of weeks we explored the characteristics of modern birds and how it’s believed that several species of theropods are believed to have survived the mass extinction and went on to evolve into modern day birds.

I wanted to share what your amazing kids have been doing in science over the last several weeks during our Industrial Revolution Unit.

I have continued to collaborate with Alison and Rachel in Preschool to go along with their weekly units of study. We explored the phases of the moon with Oreos and have been looking into the causes of some extreme weather. They will be bringing home their tornadoes in a jar this week!

For the other classes, in the spirit of innovation inspired by the Industrial Revolution, we had a wonderful opportunity to collaborate with some amazing engineering students at CSU. These young engineers worked very hard to prepare a fun lesson on the Engineering Design Process and presented it over ZOOM to our Rivendell Students. Students were presented with the challenge of creating a Rube Goldberg machine that used various energy transfers to complete a simple task. We saw machines that were designed to pour a glass of water, squirt some toothpaste and turn off a light, just to name a few.

While this process did present some challenges, the kids worked really hard to preserve and continue to work towards their goal as a team. I was super proud of all their hard work!

Older Kids are hard at work on their science fair projects. Each student has chosen their question and conducted an experiment to explore that question. It sounds like the kids have some pretty awesome questions to explore and I can’t wait to hear about what they discovered! In order to prepare for their individual projects, we completed a class experiment and reviewed the steps to the scientific method. In Bryce’s class, we learned about the field of Forensic Science and explored the relationship between height and blood splatter. In Suzanne’s class, we learned about how the size and shape of granular material influences its speed.

With the Middle and Younger Kids we spent the first part of the unit exploring matter. We learned about and explored the properties of solids, liquids, and gases. We finished off the exploration by observing how adding or taking away energy can change the state of matter by making slushies.

In preschool, we have been doing experiments or activities to go along with their weekly learning themes. We have made salt crystals, and built habitats for animals to hibernate in, and explored ramps to name a few.

The next couple of weeks are going to be spent exploring energy and after break I have a cool project in the works with some CSU engineering students that I think the students are going to love.

Thanks for letting me be a part of your kid’s learning journey and as always please feel free to reach out if you have any questions!

October was a fun month here. These young scientists and engineers have been doing great things! We wrapped up our Ancient Greece and Rome unit by embracing the Romans’ great engineering skills. We learned about the Engineering Design Process and applied these skills in a variety of ways. Younger and Middle Kids learned about how Romans were some of the first to formally construct roads to help their armies move more safely and efficiently. We then worked to design and construct a Roman Road. These levels also learned about the strength behind the invention of the arch and worked with a partner to build an arch using just cubes.

Older kids also explored arches and learned about the design process as well. They worked through the whole process of identifying a problem, planning and building prototypes, testing and making improvements to these prototypes. They designed and built fishing nets and windmills using only specific materials. I loved watching their creativity come to life and was impressed by their ability to overcome obstacles and solve problems with a group.

We have spent our first few weeks back at school embracing the Ancient Greeks’ love of astronomy! We have explored the planets in our solar system and Earth’s rotation on its axis and how it orbits around the sun. Older and Middle Kids learned about Astronomical Units and how far each of the planets are from the sun. Younger Kids and Preschool explored why we have day and night and seasons. All the levels then spent some time exploring several constellations and their respective Greek Myths.

In the coming weeks, we are going to do as the Romans did, and implement our problem solving and design skills. I’ll introduce or review the Engineering Design Process with students and then we’ll dive into some fun activities where students work to construct models to solve some problems the Romans may have faced.

Before break we wrapped up our unit on the 5 Senses, students learned to explore the world around them with heightened awareness.

The younger levels learned some of the basic anatomy of the eyes, ears, nose, tongue, and skin.  We explored our sense of touch with a grab bag and a blindfold and sense of smell by painting with spices.

The older levels dove deeper and began to understand how and why our bodies are able to receive information.  We isolated our sense of smell to see how it worked without the aide of other senses and played with optical illusions.

We build off of what we learned about the eyes and ears to deepen our understanding of light and sound in the next unit! 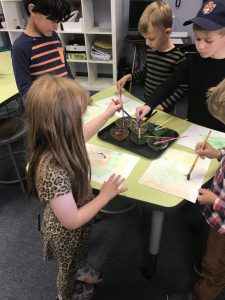 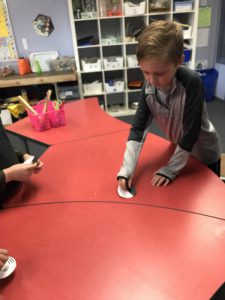 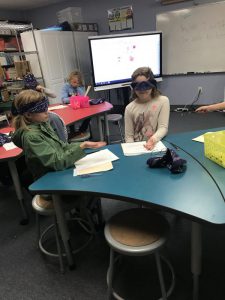 Students have been hard at work in science the last few weeks. We have been learning about reptiles and other desert plants and animals. While the younger levels learned about what makes a reptile a reptile, the older grades focused on desert animal adaptations and all the cool ways animals survive and thrive. Thanks in part to all the wonderful donations from our Fun Run, this week we had visitors from the Northern Colorado Herpetological Society. We got up close and personal with a Bearded Dragon, an Iguana, a Box Turtle, and a Ball Python!

All levels have been exploring desert plants and the adaptations they need to survive the harsh conditions they live in. We have an ongoing exploration of succulents. We are exploring succulent propagation and which conditions yield the best results. We are starting to see some real growth in a few of our Jade leaves and many of the babies from the Mother of Millions plant!

The Rivendell Scientists have been hard at work these past few weeks. We’ve brushed up on our observation skills by closely observing pine cones, leaves, and even our own hands.  We also started exploring the mummification process (preschool and younger kids will begin next week!). We mummified hot dogs in baking soda and are exploring if baking soda, Epsom salt, table salt, or a combination create the best “apple mummy”. Do you have a prediction?  Be sure to ask your kiddo about his or her hypothesis!

END_OF_DOCUMENT_TOKEN_TO_BE_REPLACED

All kids had 3 weeks to study the scientific method with me during science class.

YK pretty much followed the same process but recorded some of their own experiments in a notebook. They also worked on drawing and reading a procedure for building an engineering design.

Middle Kids actually practiced following the method 3 times and worked on writing procedures clearly. They Love collecting data and are finally learning how to analyze and summarize their results.

Older Kids spent all of their time at school for 6 weeks straight-even giving up breaks and art to perform their own research, writing, experiment, graphs, conclusions and boards. It was a LOT of work and the first time we have used this “AT SCHOOL” method….but as many of you have seen through judging, it was worth it. We had a blast and learned so much more than just the method.

The kids had a wonderful time studying Latin America. I believe is truly a geographical wonderment stretching from the equator to the southern pole. This large geographical area provides one of the most diverse landscapes and unique locations in the world.

OK began by investigating the phenomenon of El Nino and La Nina, which is tied to much of the unique weather patterns and climate of Latin America. Learning that one wind, water, weather system can affect half of the globe was beyond awe and scope of understanding…..well, a phenomenon! OK also learned a lot from a Rain forest debate. They were given characters and arguments for or against preserving, using it as an income resource through tourism or logging and mining with little thought for the habitat. They did great asking meaningful questions and posing persuasive counter arguments.

MK used their knowledge to break the continent apart into specific areas of vegetation and habitat. They then mapped and studied the variety of creatures that reside in each habitat. From Savannah, Rain forest, Desert and Tundra to a huge ocean and river systems, Latin America has it all. They chose one creature from the Rain forest to study and made a guide book for our library. Our grand finale is a labeled, collaborative 3D Rain forest.

YK used the wide array of animals to dive further into classification and descriptive characteristics. They made maps, scientific drawings and a 2D layered rain forest complete with clues describing the micro-climates contained within. They ended with a celebratory Rain forest classification BINGO game!

PK also worked on descriptive language and general classification. Many are able to list enough characteristics to differentiate between and sloth or chinchilla- both of whom are cute, furry and four legged. So they had to move into more detail such as short legs, long ears or movement type. They placed animals into their correct habitats and even created a 4 layered rain forest! As usual, we ended our unit with a FREE PLAY SCIENCE DAY> they always love this time and are FULLY engaged and curious.